Even though shock absorbers have been in use since the early days of the automobile, they are not well understood by the general driving public. Even automotive enthusiasts will neglect and often ignore the shock absorbers on their car, degrading the car’s handling performance and ride comfort.

Even worse, worn shocks can be dangerous, especially during the severe maneuvers that might be necessary to avoid an accident. As we will see, for such a simple yet effective device, shock absorbers seem to get little respect.

The gravity of the situation
Strangely enough, despite their name, shock absorbers don’t absorb shocks. In reality, that is the job of the springs in a vehicle’s suspension system. As a wheel encounters a bump, the wheel moves upward, compressing and storing the energy of the bump into the spring. This compression is actually what absorbs the shock of the bump.

But now that the spring is compressed, it contains potential energy that must be released. The spring does this by bouncing back to its original uncompressed length, at the same time pushing the vehicle’s body upward. In an example of the old adage “what goes up, must come down,” gravity pulls the weight of the body back down, recompressing the spring. If the shock absorbers are worn, the vehicle ends up bouncing its way down the road after every bump until all of the energy is used up. In the worst cases, this bouncing can actually pull a vehicle’s tires off the ground, making the vehicle uncontrollable.

Bring on the dampers
Shock absorbers, more properly called dampers, are mounted alongside (or inside) the springs at each corner of the vehicle. A shock absorber’s job is to provide resistance to the movement of the spring. Technically speaking, it does this by taking some of the energy that is being used to compress the spring and turning it into heat. So whether the vehicle is bouncing up or down from a bump in the road, that motion is held in check by the shock absorber, and once again some of the kinetic energy released by the spring is changed into heat by the shock absorber. This conversion of energy keeps the vehicle’s body from bouncing more than once or twice, providing a controlled ride and helping to keep the vehicle’s tires safely in contact with the ground.

How do shock absorbers work?
If you have ever waved your hand back and forth through water, then, in principle, you know how a shock absorber works. The resistance to motion you feel with your hand changes with speed – the faster you move your hand, the more energy it takes to push against the resistance of the water.

A shock absorber works much the same way. Inside the shock absorber there’s a piston that moves inside a tube that is filled with oil. As the piston moves, the oil is forced through tiny holes and valves within the piston, precisely controlling the amount of resistance to movement. This resistance to the motion converts the energy into heat. (Yes, a shock absorber that has been doing its job over a rough road does get warm!)

Although there have been many different designs for shock absorbers over the course of automotive history, today there are four basic types available:

Sometimes these types of shock absorbers are incorporated into a strut-type suspension that uses the shock absorber as part of the spring support, but the basic principles still apply.

Twin-tube shocks
The twin-tube design is the most common and often the least expensive. These are the ordinary shock absorbers that typical passenger cars and trucks use, and they are widely available at car dealerships, auto parts stores and repair facilities. As the name implies, in a twin-tube shock, there are two actual tubes – one the outer shock body and the other an inner cylinder in which the piston moves. Tiny holes or orifices in the piston as well as special valves between the inner and outer tubes restrict the flow of oil to control wheel motion.

The limitations of twin-tube shocks become apparent when they are used over very bumpy roads. In this case, the rapid motion of the piston can cause the oil to overheat and to foam, reducing the shock absorber’s ability to control wheel motion. The result is a ride that becomes increasingly sloppy, especially when traveling over a washboard surface. Heavy-duty twin-tube shock absorbers are usually stronger, with more robust piston shafts and mounting points, and they may use oils that are more resistant to foaming, but ultimately they still have the same limitations. 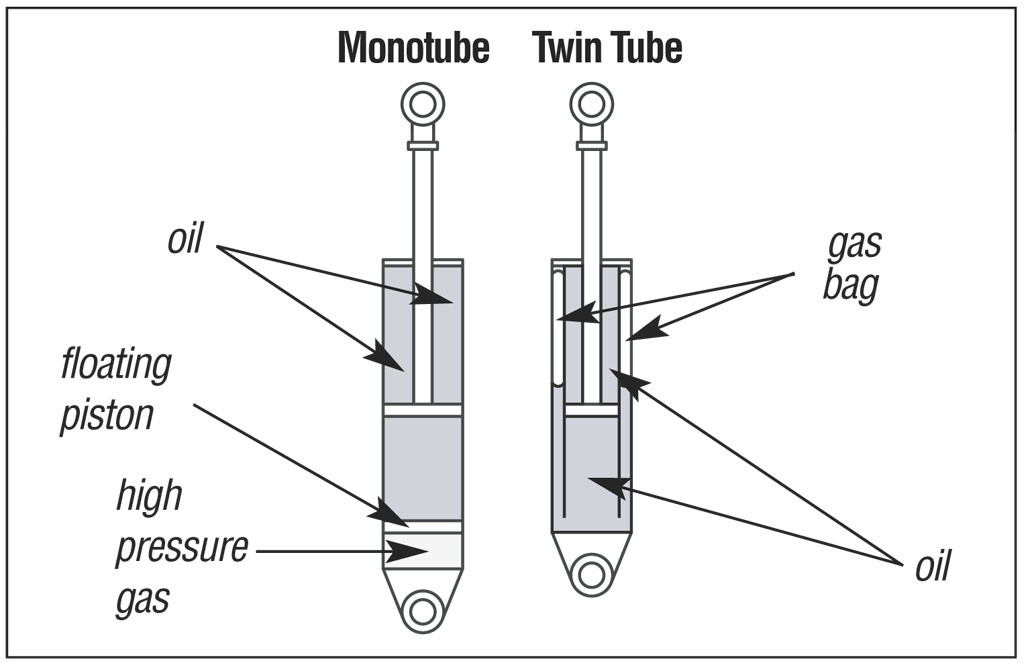 Mono-tube shocks
The heat generated in the twin-tube shock tends to get trapped within the walls of the shock absorber body, reducing its effectiveness in controlling wheel motions. The mono-tube shock absorber uses a piston traveling within a single tube that is exposed more directly to the air. The general advantages and disadvantages of this design are:

Gas-filled mono-tube shocks
To prevent foaming and bubbles in the oil, which degrades shock-absorber performance, a gas-filled mono-tube shock has a chamber of high-pressure nitrogen above the oil chamber. This high-pressure gas makes it difficult for bubbles to form in the oil, even when the shock absorber moves in and out very quickly, as it might while traveling rapidly on a very rough or washboard road.

Gas-filled shocks are expensive, since they require strict manufacturing tolerances, but they are very resistant to fade and consequently are popular in off-road racing and rallying. Gas-filled shocks, by the way, are not the same as “air shocks,” which use an air chamber separate from the shock oil. An air shock is actually an air spring that raises or lowers the vehicle when air is added or removed through a valve.

External reservoir shocks
The top of the line in shock absorbers is the external-reservoir design. These shocks, primarily designed for ultra-high performance and racing applications, use a small, lightweight shock body that is connected through a hose to a reservoir of oil mounted in a different part of the vehicle. The goal of an external reservoir shock is to:

External reservoir shocks are very expensive and are really only needed in extreme high-performance applications. 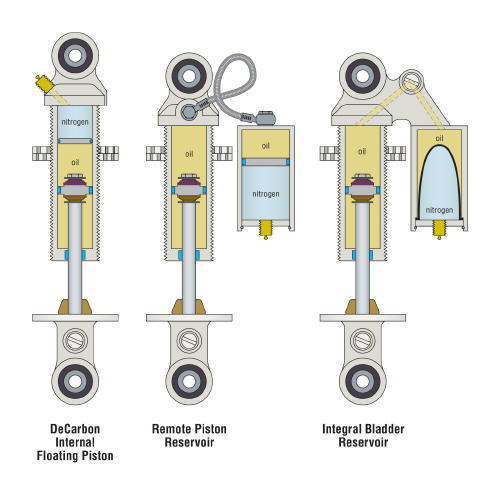 When to buy shocks
Shock absorbers last a long time, but they tend to degrade slowly throughout their life. So when is it time to replace them?

Shocks can be tested on a shock machine, but to do so requires them to be taken off the car. With labor rates what they are, if your mechanic already has the old shocks off, it makes sense to replace them with new ones.

Replacing worn-out shocks can revitalize the handling of a vehicle, returning much of the crispness it had when new. When combined with a new set of tires, new shocks can transform a high-mileage vehicle with sloppy handling and a bouncy ride.

Worn Shocks and Their Conditions

Choosing shock absorbers for your vehicle
Choosing which shocks to buy largely depends upon what kind of vehicle you own and the kind of driving you do.

As with most automotive components, it is important that you buy the right shocks for your specific vehicle, since mismatched shocks can drastically affect handling and could even be dangerous. The best advice will probably come from a mechanic who is familiar with your type of car. It goes without saying that if you make the right choice, the improvements in your vehicle’s ride and handling can be shocking!