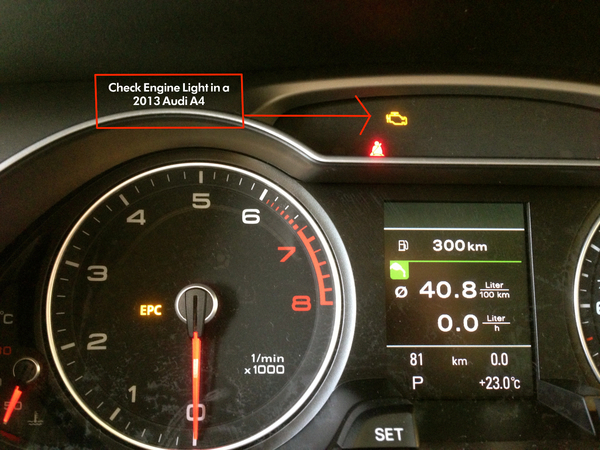 Twist the key to start your car, pickup truck or SUV, and you are faced with a veritable Christmas tree of lights on the dashboard. Even entry-level cars have warning lights indicating that the engine, anti-lock-braking system and airbag restraint system are ready for action. One by one, these lights wink out as sensors communicate with computers, and each system is checked and determined to be in working order.

Once the vehicle has been started, the engine oil pressure, coolant level and temperature, transmission status, and fuel level are all sampled by car engine sensors, and their status is reported to the driver, sometimes using traditional analog gauges but more commonly through a general “systems OK” message. Some cars alert the driver only when there is something wrong, illuminating a “Check Engine” light to tell you that all is not well.

The old analog days
In the old days, car engine sensors and instrumentation were very simple. There was an oil light that would illuminate when the oil pressure was low and an alternator light that would come on when the battery wasn’t receiving a proper charge. Sometimes the gauges were the sensors. For example, the oil pressure gauge was often attached to the engine itself with a thin oil line that ran to the gauge in the dashboard. All of these analog gauges were quite simple, and it was up to the driver to monitor them while driving. If something went wrong, the driver was expected to notice an odd reading on one of the gauges.

The new digital age
Today’s vehicles are obviously more complicated. Some of this complication is the result of legislated exhaust emissions and safety regulations. Some of it is due to the vast array of power accessories and luxury conveniences on all but the most basic cars. Digital computers now control engines. Luxury cars have “body computers” to control luxury features. And all of these computers rely on fast-acting, reliable car engine sensors.

On the plus side, these digital electronic systems make it easy to constantly monitor vital engine parameters like oil pressure, coolant temperature and exhaust emissions and report back to the driver when something is amiss. Car engine sensors continually monitor major systems, sending real-time signals to onboard computers. And these computers keep track of everything, alerting the driver only when something is wrong or when the vehicle is due for service.

How far has this gone? In many vehicles today, digital computers control not only engine functions but also everything from the climate control system to headlight and taillight operation. More than that, many systems are now required to store information for later access. Service technicians can plug their own computers into a vehicle and often quickly diagnose what is wrong, even if the problem is sporadic. That is, of course, if everything is operating as it should and if the technician has been thoroughly trained and has the proper service tools.

Too many wires?
All of these sensors and computers require lots and lots of electrical wires, connections and harnesses. The sheer number of wires needed to control everything from automatic transmissions to power windows is overwhelming. The space occupied by the wiring and even the weight of the wiring harness is a real problem for automotive engineers trying to package everything into smaller spaces. For many vehicles, the solution is multiplexing.

Because there already are numerous computers in the vehicle, adding a few more is no big deal. Now, for example, instead of running a heavy wire that carries electrical power from the power window switch directly to the motor that raises a window, a whole new way of controlling the window motor has been developed. Rather than carrying the voltage from the switch to the motor, the switch is now connected with a thin, low-voltage wire to a body-control computer. This computer senses the activation of the switch and then sends a signal to the window motor, telling it to open or close the window. The window motors all have their own power source wires and are just waiting for a signal to come down the multiplex line from the computer. And, of course, many of these systems have sensors that tell the computer not only when the window is all the way up or all the way down but also whether there is anything impeding its progress.

With multiplexing, it is possible for a computer to perform a variety of interrelated functions, such as tilting the outside mirrors downward when reverse gear is selected or adjusting the interior cabin temperature based upon how quickly the engine is warming up on a chilly morning. The wide use of so many computers also allows the engine management system to monitor an even broader range of engine functions. But when things go wrong, it can be even more difficult to figure out where the problem lies.

Troubleshooting trouble
Before the use of computerized controls, fixing an automobile was straightforward and logical. Gasoline engines need a proper fuel and air mixture, compression to squeeze the mixture together, and a spark plug to ignite the mixture, forcing the piston downward. In the old days, if you had fuel, you had spark and you were somewhere close to correct in your ignition timing, your car’s engine would run. Problems in these purely mechanical systems were relatively easy to diagnose.

Modern computer-controlled vehicles also must have the proper mixture of air and fuel ignited at the proper instant in order to operate. The difference today is that a variety of engine parameters must be controlled to ensure highly efficient combustion for better fuel economy and reduced exhaust emissions. It’s great when it is working, but sensors that monitor engine temperature, oxygen level in the exhaust gases, engine speed, pre-ignition knock, crankshaft position and many other parameters must all be working properly or the engine may run poorly or not at all.

A failure of the crankshaft position sensor, for example, means that the engine, although mechanically sound, has no way of figuring out when the spark plugs should fire, so it won’t start. Similarly, if the temperature sensor should malfunction, the computer might attempt to compensate for what it has sensed as a cold running engine. It might adjust the fuel injection and timing, causing the engine to run poorly. The missing or stuttering engine would lead an experienced but traditionally trained technician to assume that there is something wrong with the ignition system or the spark plugs. In reality there may be nothing wrong with the engine and it may be operating at its proper temperature, but because the sensor has told the computer that there is a problem, the computer sets out to correct it.

The reality is that it has become very difficult to diagnose a vehicle problem without sophisticated scanning computers that interface with the vehicle’s own onboard diagnostic computer.

Future tech
As complex as vehicle control and monitoring systems have become, they are just a harbinger of what to expect in the future. New hybrid vehicles, which supplement the power from a gasoline engine with an electric motor, require dramatically more sophistication in sensing and control. Some of these systems actually shut the gasoline engine off when it is not needed, and then restart it instantly when its power is required. This process requires a wide range of sensors, all operating properly.

Such dependence upon car engine sensors and electronic systems requires a level of quality and reliability that automobiles have never needed to possess before. It’s a challenge that, if met, will make our vehicles ever more reliable… but it may also make them even harder to diagnose and service when something simple goes wrong.